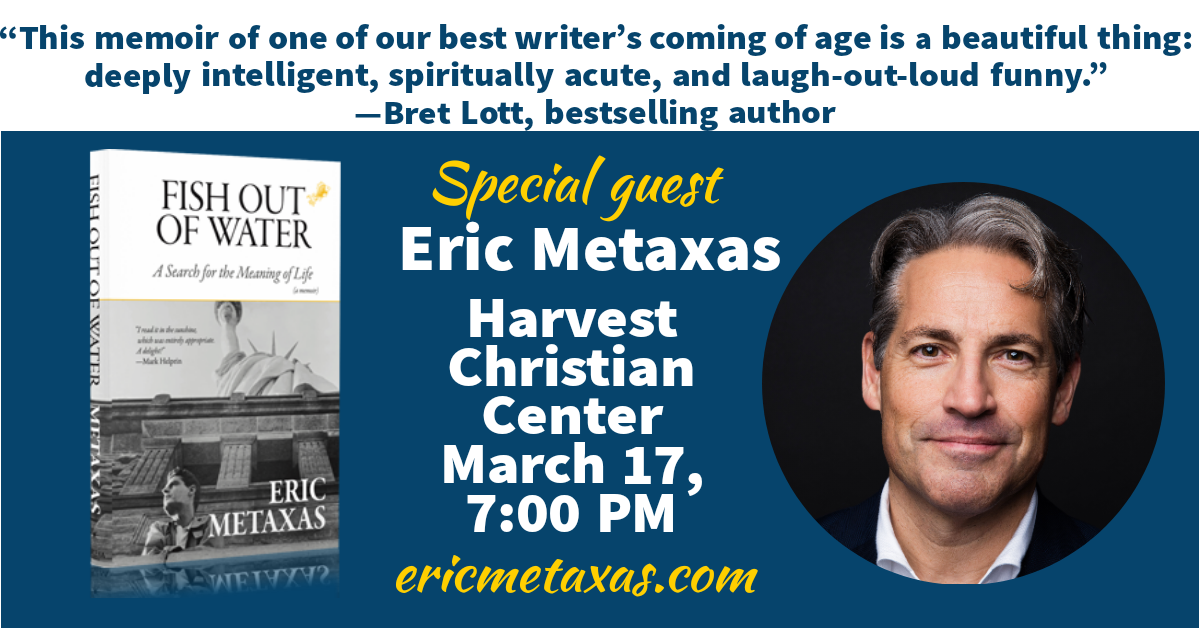 Eric joins us to talk about his newest book, a biography, Fish Out of Water: a Search for the Meaning of Life. Books will be for sale after the event and Eric will stay to sign those books!

What Happens When One of America’s Most Beloved Biographers Writes His Own Biography?

For Eric Metaxas, the answer is Fish Out of Water: A Search for the Meaning of Life—a poetic and sometimes hilarious memoir of his early years, in which the Queens-born son of Greek and German immigrants struggles to make sense of a world in which he never quite seems to fit.

Renowned for his biographies of William Wilberforce, Dietrich Bonhoeffer, and Martin Luther, Metaxas is the author of five New York Times bestsellers, the witty host of the acclaimed Socrates in the City podcast, and a nationally syndicated radio personality. But here he reveals a personal story few have heard, taking us from his mostly happy childhood—and riotous triumphs at Yale—to the nightmare of drifting toward a dark abyss of meaninglessness from which he barely escapes.

Along the way he introduces us to an unforgettable troupe of picaresque characters who join this quintessentially first-generation American boy in what is both bildungsroman and odyssey—and which underscores just how funny, serious, happy, sad, and ultimately meaningful life can be.

Eric Metaxas is the #1 New York Times bestselling author of Martin Luther, If You Can Keep It, Bonhoeffer, Amazing Grace, and Miracles. His latest work is a literary memoir titled Fish Out of Water: A Search for the Meaning of Life. He has written more than thirty children’s books, and his books have been translated into more than twenty-five languages. His writing has appeared in the Wall Street Journal, the New York Times, and the New Yorker, and Metaxas has appeared as a cultural commentator on CNN, Fox News, and MSNBC. He is the host of The Eric Metaxas Show, a nationally syndicated daily radio show heard on 300 stations nationwide and aired on television on TBN. He lives in New York City with his wife and daughter.